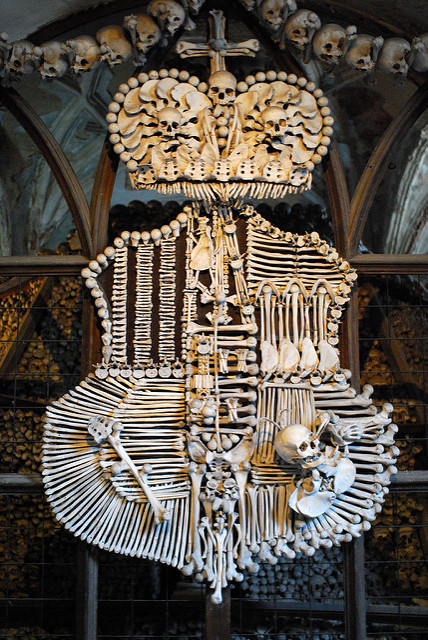 Sedlec Ossuary is a Roman Catholic Church located in the Czech Republic. You WILL be surprised TO KNOW that this church is made up of 40000-70000 human body skeletons. Bones are decorated in a very attractive way in this church in the form of chandeliers, garlands, monstrance, signature

These bones are of those people who died during the plague of 1318 and 15th century Hussite War.
A huge Chandelier of bones, in which almost every bone of the human body is hanging from the center of the church and covered with scalp beads.
It is said that the skeleton was originally buried in the church graveyard, which was closed in the late 15th century.ib

In 1870, local wood carver Frantisek Rint was tasked with the job of artfully arranging these bones and skulls into creative decorations.
To create an equally for building blocks, each skull was bleach carefully until it reaches the desired color.

Famous as a “Skull Church” Also

It looks like the set of the “Pirates of the Caribbean”.
This church is most visited tourist attraction of the Czech Republic – attracting over 200,000 visitors annually.