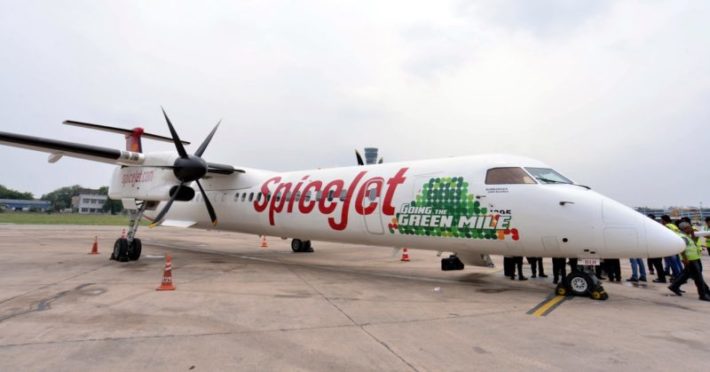 India’s first Biofuel-powered flight was successfully tested for domestic operations on 27th August Monday between Dehradun and New Delhi. The Bio-fuel is expected to reduce India’s dependency on Aviation Turbine Fuel (ATF) and help bring down air fares. SpiceJet’s biofuel is a mix of the oil extracted from the seeds of Jatropha plant and aviation turbine fuel.

The new Biofuel policy and successfully implementation of it in the aviation sector was announced on 10th August by Prime Minister Narendra Modi. This is a great achievement for clean energy, Biofuel.

In the emerging aviation industry, this will be beneficial for everybody since it is not only economical but also environment-friendly. It would help generate employment and additional income for the farmers,” Pradhan said. “This fuel is low cost and helps in significantly reducing carbon emissions. It has the potential to reduce our dependence on traditional Aviation Fuel by 50 per cent on every flight and bring down air fares.

India is the fastest growing aviation market in the world today and it is our responsibility to grow using clean and sustainable technologies.

Made from Jatropha crop, Biofuel has been developed by the Council for Scientific and Industial Research – Indian Institute of Petroleum (CSIR-IIP), in Dehradun.

It meets the specification standards of Pratt and Whitney and Bombardier for commercial application in aircraft and recognised by American Standard Testing Method (ASTM).

Spicejet had last year placed orders for 205 Boeing 737 Max fuel-efficient planes that are expected to reduce fuel consumption by about 15% and will leave 40% lesser noise footprint. SpiceJet said that the company intends to use the mixture of 75% ATF and 25%